The location – The last stop in the Ashtavinayak yatra is Mahaganapati temple at Ranjangaon in Shirur taluka. It is about 52 km away from Pune
city on the Pune-Nagar road. The road conditions are very good, so travel to this Ranjangaon Ganpati temple is quite smooth. Public transport connectivity is also
available. 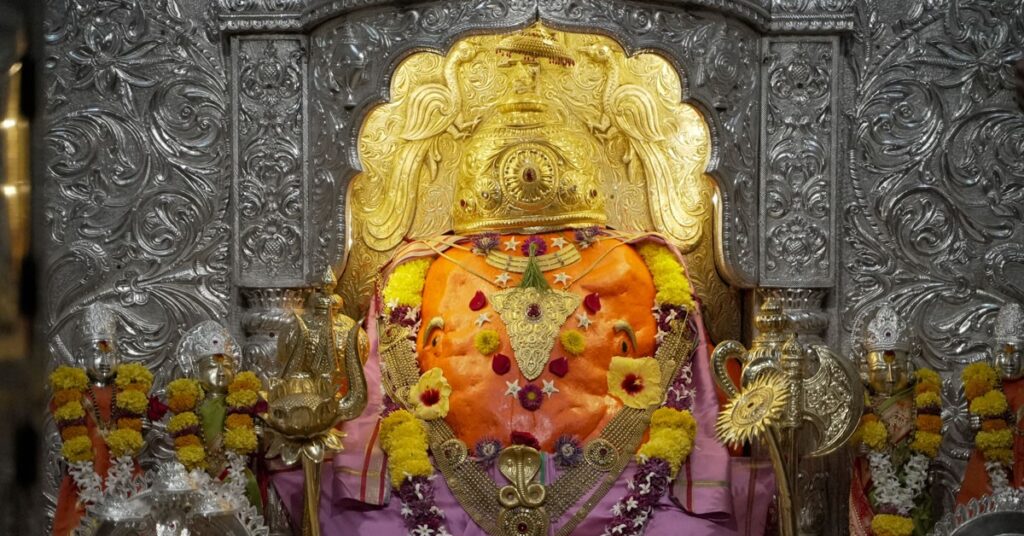 The legend – The Ashtavinayak form here is known as MahaGanapati and is said to be the fiercest and most powerful form of the god. Legend
has it that once Lord Shiva had to battle a super powerful demon called Tripurasur whom he could not vanquish easily. At this point, Shiva prayed
to Ganesha who helped him defeat Tripurasur. Subsequently this temple was built at the spot where Lord Shiva had prayed. Sometimes this form
of Ganapati is referred to as “Tripurarivade Mahaganapati”. Popular belief is that there is another idol called “Mahotkat” having 10 trunks and 20
hands which is hidden in a basement chamber of the mandir. Amongst all the forms of Lord Ganesha, Mahaganapati form is the fiercest 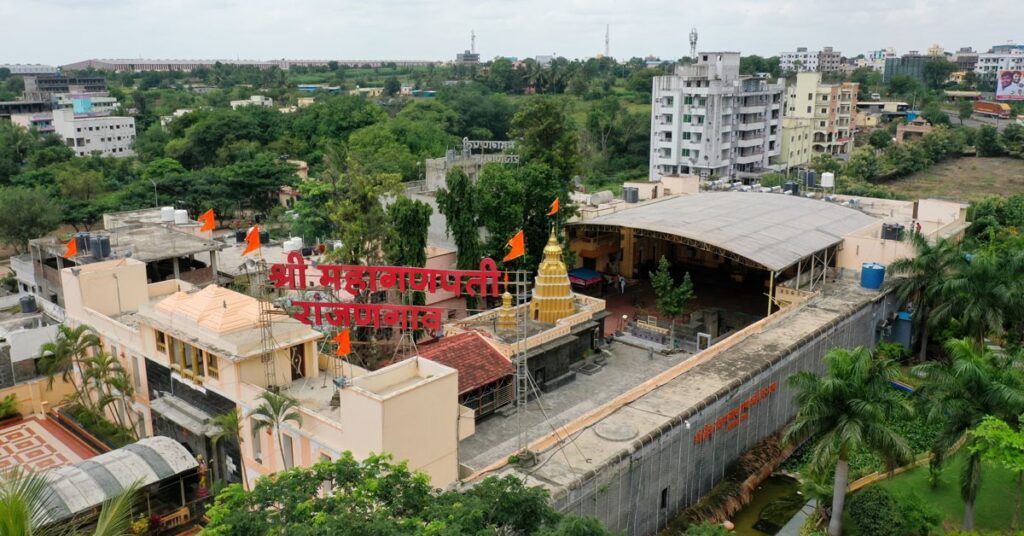 The temple story – The idol of MahaGanapati is east facing, his trunk is turned leftwards and he sits crosslegged on a lotus. His consorts Riddhi
and Siddhi are seen on either side. The original temple of Ranjangaon is supposed to have been built in 9th or 10th century. But the present temple
architecture shows a strong resemblance to Maratha architecture of the Peshwa era. The temple was renovated by Madhavrao I who constructed
a beautiful entrance gate with Jay and Vijay flanking the sides. A nagarkhana is placed above the entrance gate. There is a big building in the form
of a Peshwa palace right behind the temple which is now used for daily activities of the temple. This temple marks the end of the Ashtavinayak
yatra and ideally the devotees should re-visit the Morgaon temple again to complete the pilgrimage.

Things to do around here- A village called Morachi Chincholi is just 14 km away from Ranjangaon Ganpati temple. It is a quaint little place full of peacocks,
ideal for a day outing or a picnic with family and friends. Another interesting place a little further away from here is Nighoj, about 28km away. In
Nighoj one can see natural pot hole formations in the river bed and is quite an interesting place to explore.

To get Virtual Darshan of Shri Mahaganpati Ranjangaon  – Click Here