Known as “Krouncha Peetha” in Puranic times, the Sri Chamundeshwari temple is one the 18 Shakti Peethas or Sati Peethas and one of the most
iconic temples in Mysore or Mysuru. It is believed that Sati’s hair fell at this spot and the Devi is worshipped here in the form of Chamundeshwari,
one of the fierce forms of the Mother Goddess. She’s the slayer of the demons Chanda and Munda and the tutelary deity of the Mysore Maharajas
since ages. 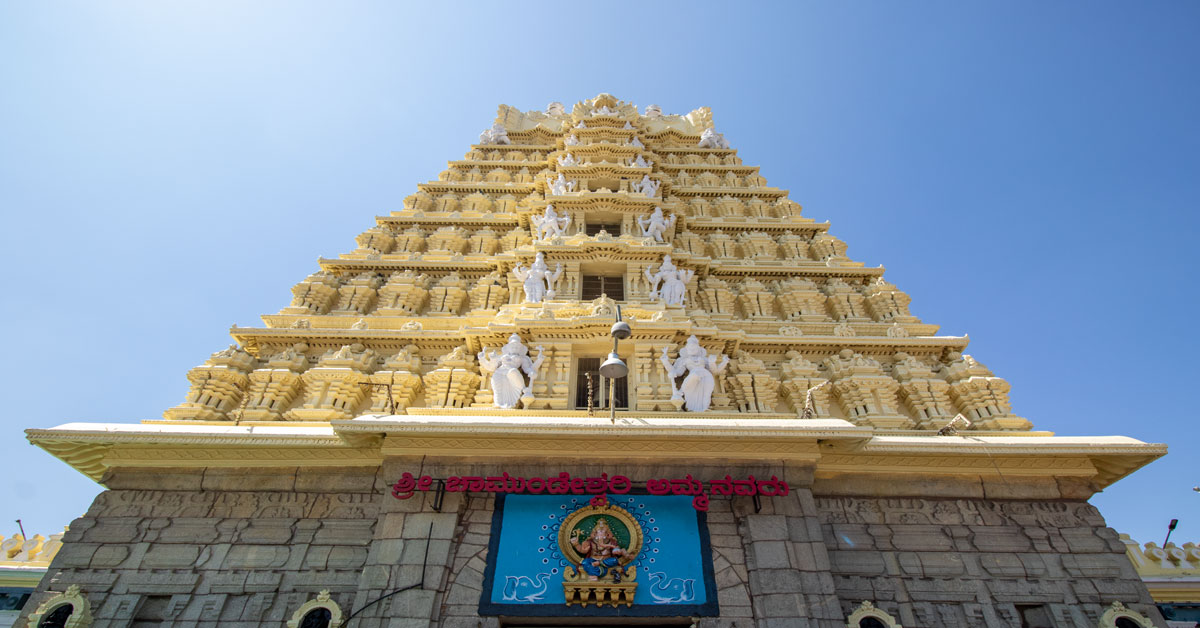 Location –  The temple is located 13km away from Mysore city atop the Chamundi Hill at a commanding height of 3489 feet. The Skanda Purana
has mention of a sacred place called “Trimuta Kshetra” surrounded by 8 hills which is also referred to as Krouncha Puri. One amongst these 8 hills
is the Chamundi Hill, earlier called “Mahabaladri” in honour of the Mahabaleshara Shiva temple there. Chamundi Hill is accessible by road from
Nanjangud side and KSRTC buses are easily available. The nearest railway station is Mysore Junction.

The legend and temple story – Goddess Chamunda or Chamundeshwari is one of the most fearsome forms of Parvati and one of the chief
Matrikas as per Hindu mythology. She’s depicted as a fierce warrior who slayed the demons Chanda and Munda and is shown as being surrounded
by corpses, jackals, serpants and skulls. Chamunda is sometimes associated with war, disease, epidemics, death and decay.

Sri Chamundeshwari temple is ancient, dating back to Puranic times, but at that time it was a small shrine. The shrine was supposedly built in 12th
century by rulers of Hoysala dynasty. In 1399 CE, when the Wodeyars came to power, the temple was expanded and gained prominence. In 1659,
one thousand steps were constructed to reach the summit of the hill and on the 700th step there is a huge statue of Nandi the bull, 15 feet in height.
Krishnaraja Wodeyar III repaired the shrine in 1827, built a marvelous gopuram with 7 golden kalashes on top, donated a chariot shaped like a lion
and gave numerous precious jewels to the Devi. The temple is built in the typical Dravidian style with gopuram, vimana, sanctum sanctorum, shikhar
and prakara as its component parts. The images of Ganesha and Anjaneya are seen inside the temple. The main door to the sanctum is guarded by
two dwarpalakas named Nandini and Kamalini.

Devotees believe that Goddess Sri Chamundeshwari fulfills all their desires and naturally this is one of the most visited temples in Karnataka. As is
common to most Devi temples, Navratri festival is celebrated here with great pomp and grandeur, especially Mysuru Dasara. The other important
festivals are Ashada Shukravara, Ammanavara Vardhanthi & Chamundi Jayanthi. 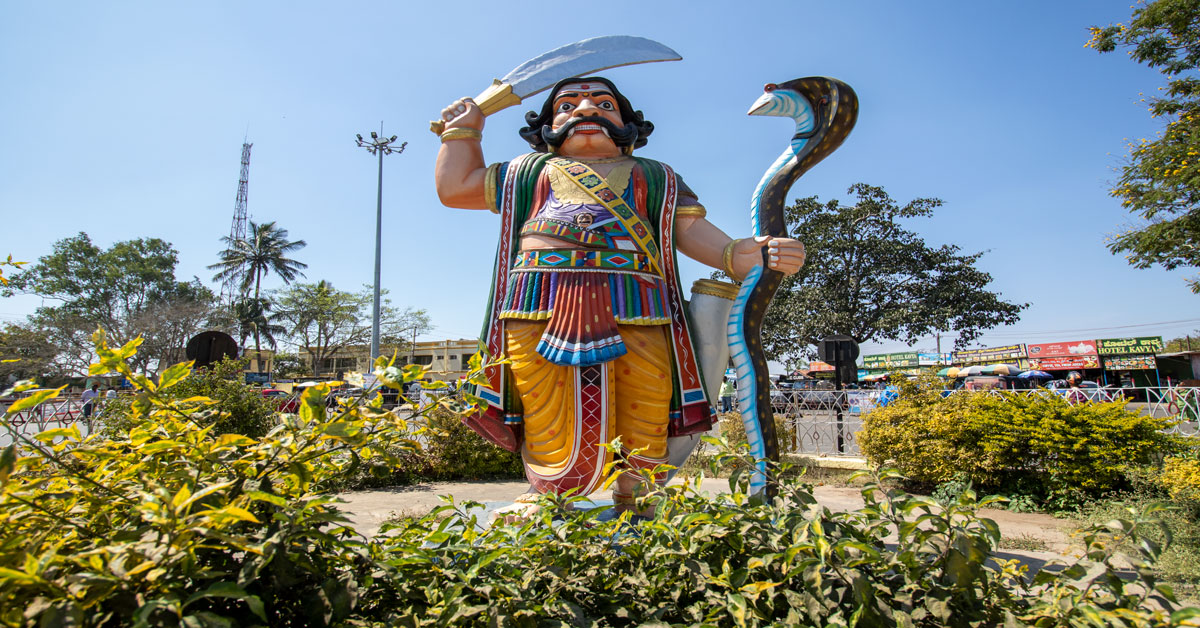 Things to do around  – Apart from the main temple, there are other beautiful temples such as Mahabaleshwara Shiva temple & Narayanswamy
temple. Chamundi Hill is a beautiful location giving a bird’s eye view of Mysuru. The hill is covered in forests which is home to many birds and
animals. Some of the important landmarks that can be seen from the hill top are Mysore Palace, Lalitha Mahal Palace, Dasara Exhibition grounds,
race course, Kukkarahalli lake, St. Philomena’s Church and Krishnarajasagar.

Mysuru is a very famous tourist spot in South India. Its rich in culture, architecture, handicrafts and scenic beauty. The Mysore Palace, Vrindavan
gardens, Railway museum, Jaganmohan Palace, Shivsamurda falls and Bandipur national park are few of them. Mysuru silk sarees and items
made of sandalwaood are world famous and must feature on a visitor’s itinerary. Another thing that must not be missed is the delectable melt in
the mouth sweet Mysore pak. One needs to taste it to believe how amazingly delicious it is.