The Bhavani Sangameshwarar Temple or Thirunana or Thirukooduthurai is a famous temple in the Erode district of Tamil Nadu. The presiding
deity here is Lord Shiva, along with a few other deities who have shrines dedicated to them. The temple has a special location as it sits at the
confluence of three rivers, namely Cauvery, Bhavani and the mythical invisible river Amudha, thus earning the name Dakshina Triveni Sangamam. 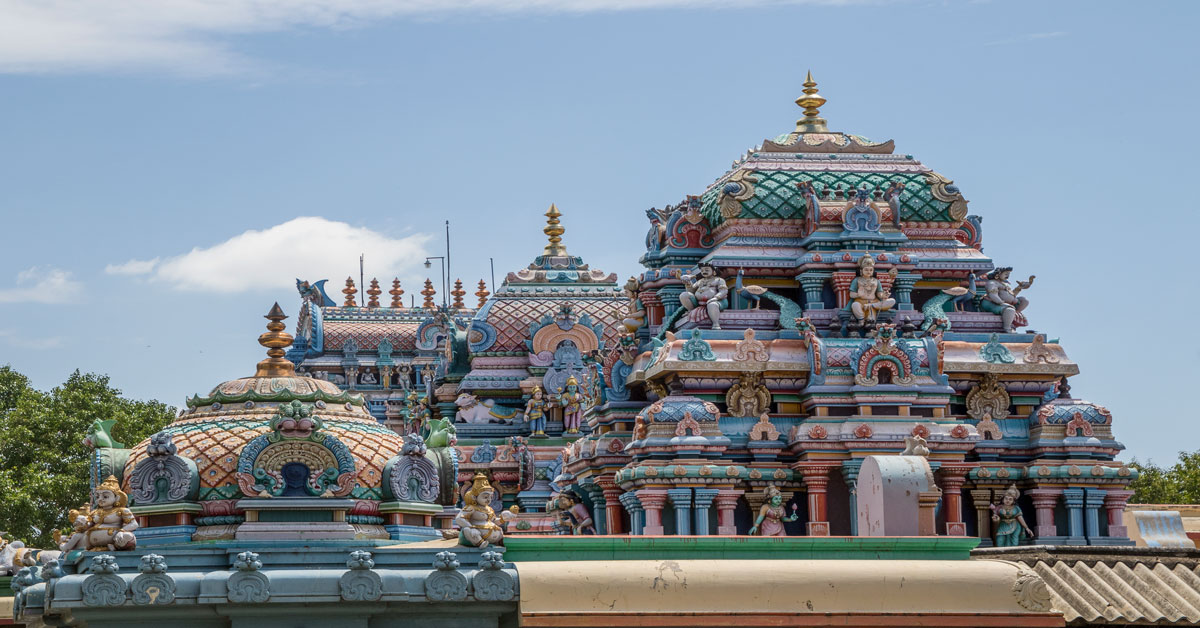 Location –  The temple is just 15km away from Erode, if travelling by train, then Erode is the nearest railway station and by air, Coimbatore is the
nearest airport. The town of Hosur is also about 7km away and transport is available from here also.

Legend and temple story – The temple which is referred to as Thirunana in old Tamil literature has an interesting legend associated with it. It is
told that Kubera, son of Rishi Vishrava had an aircraft in which he used to visit Shiva temples. Once on a trip he noticed that at a particular place,
a deer, a tiger, a cow, an elephant, a snake and a rat were peacefully drinking water under an Ilandhai tree without any enmity amongst them.
Kubera was surprised to behold this and at that moment a divine voice told him that this place was sacred and that gandharvas lived here. He
was further advised to worship the Shiva linga under the Iladhai tree and from then on the Sangameshwarar temple came into being. This temple
is perceived as an unison of Shaivism and Vaishnavism and as a symbol of this unity, a statue of a cow is present behind the main deity. Local
folklore says that under each inch of the temple, there is a shivalingam and that the deity was worshipped here by great sages like Vishwamitra &
Parasara. 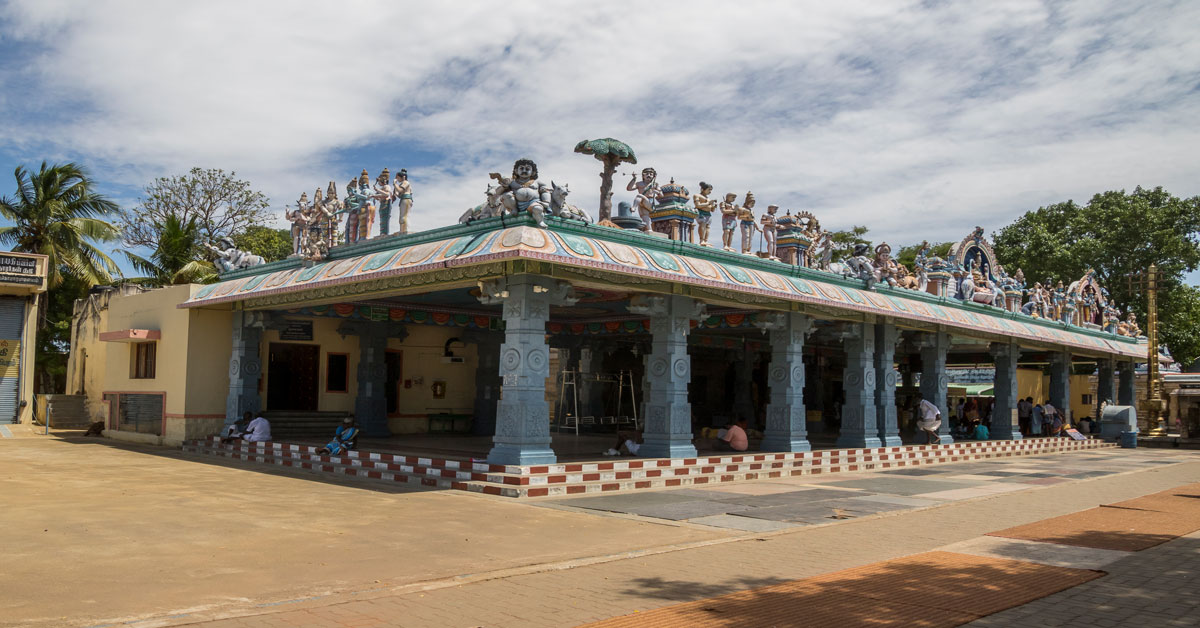 During the Chola and Pandya empires, there used to be a cave connection between this temple and Chidambaram temple and the puja used to be
performed at exactly the same time at both places. In 1804, a British collector of Coimbatore district named William Karo had come to Bhavani for
some official work. During his stay, he was woken up one night by a little girl who said that the bungalow in which he was staying would collapse.
Having said so, she took him outside to safety and soon the bungalow collapsed. The local temple  priest told Karo that the girl was none other
than Bhavani Vedanayaki Amman, the presiding goddess of the Bhavani temple. As a token of his gratitude to the goddess, Karo presented a
gold plate to the temple which is present till date. 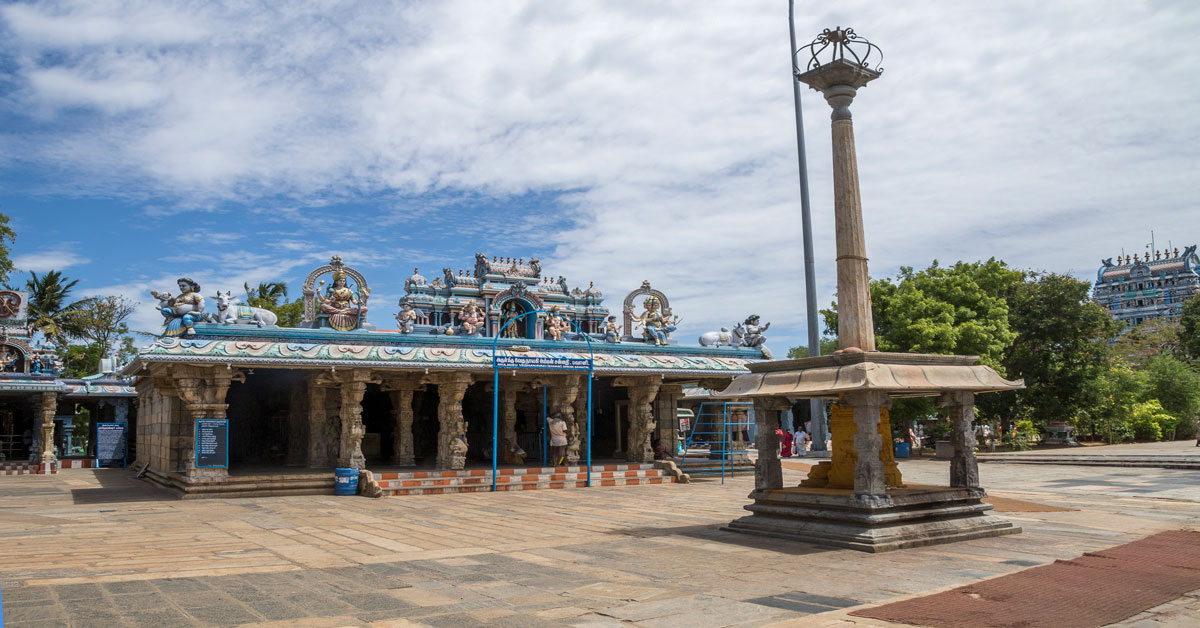 Shiva is the main deity in the form of Sangameshwarar and his consort is Pannaar Mozhiyal or Vedanayaki, there’s a shrine of Kartikeya in
between Shiva and Parvati’s shrine. The temples of Vishnu and his consort Soundaravalli Thaayar are also very famous. The temple has a typical
Dravidian style of architecture characterized by an exquisitely carved gopuram, stone statues, ambal sannadhi and the main tower. The stone
statues decorating the pillars inside the hall are true examples of South Indian temple sculpture.

Things to do around  – Apart from the beautiful temples, Erode has a number of other tourist attractions to offer. The Government Museum of
Erode, Vellode bird  sanctuary, Bhavani Sagar dam, Kodiveri dam, Bannari Amman temple & Thindalmalai Murugan temple can be visited on a trip
to Bhavani.