Some places on earth have a heavenly aura around them which gives them a unique charm. Bhimashankar is one such place. Nestled high
amidst the lofty Sahyadri mountains, enrobed in thick virgin forests teeming with beautiful plants and animals, gurgling rivers, the sun playing
hide and seek amongst the clouds and amidst all this is the peaceful abode of Lord Shiva in the form of Bhimashankar. 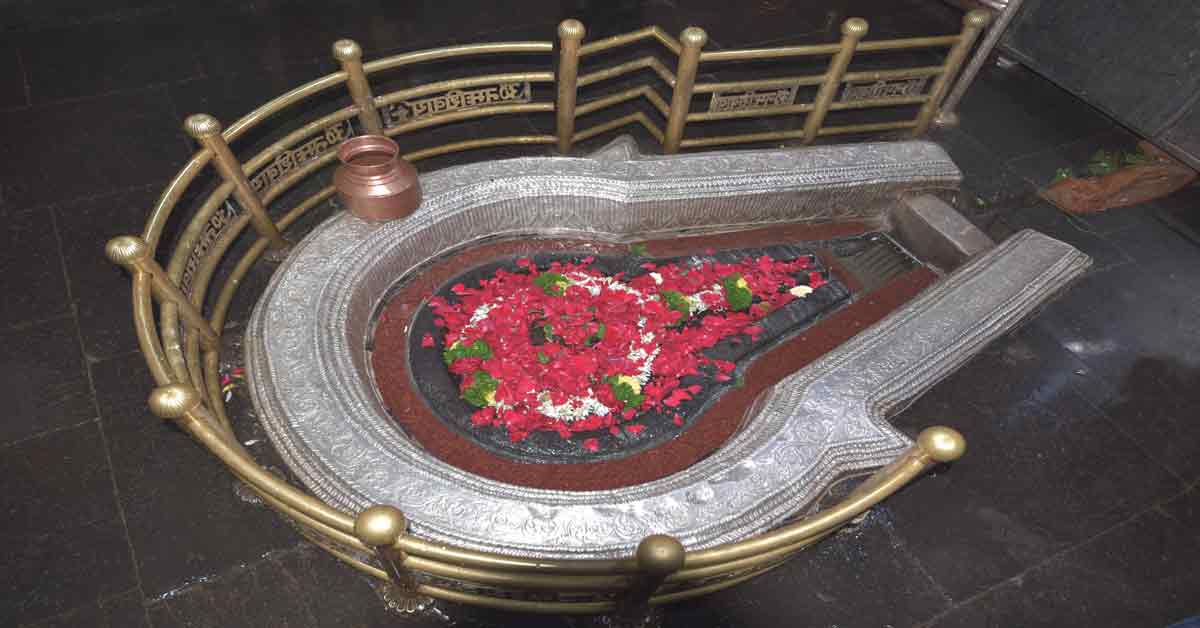 How to reach – About 120 km away from Pune in the Khed taluka is located the Bhimashankar Jyotirlinga temple, one amongst the three
Jyotirlinga temples in Maharashtra. There are two main routes to reach this place, one via Manchar and the second one via Khed (alias Rajgurunagar). Bhimashankar temple’s location is remote, amidst mountains, that’s why rail connectivity is not available. Easiest way to travel is by private vehicles
but state buses also ply on this route. During festivals like Shivratri when lakhs of people visit the temple, the frequency of buses increase.

The Jyotirlinga story – Hindu mythology is full of fascinating stories and accounts of the origin of the various manifestations and incarnations of
Gods and Goddesses. One such very interesting story is there regarding the origin of the Jyotirlinga shrines of Lord Shiva. The Shiva Purana narrates
that once Lord Brahma and Lord Vishnu got into an argument regarding the supremacy amongst the Tridevs. In order to settle the argument,
Lord Shiva manifested himself in the form of an endless fiery column of light which spanned the three worlds and he asked Vishnu and Brahma to go
and find the beginning and end of the column. Brahma in the form of a gander flew upwards and Vishnu in the form of a boar dug down into the ground
in search of the beginning and end of the column of light but none of them could be successful. However, Brahma lied that he had found the pinnacle of
the column while Vishnu accepted the truth that he couldn’t find the bottom. Angered by this lie, Shiva punished Brahma by cutting off his fifth head and
cursed him that he wouldn’t be worshipped on earth. 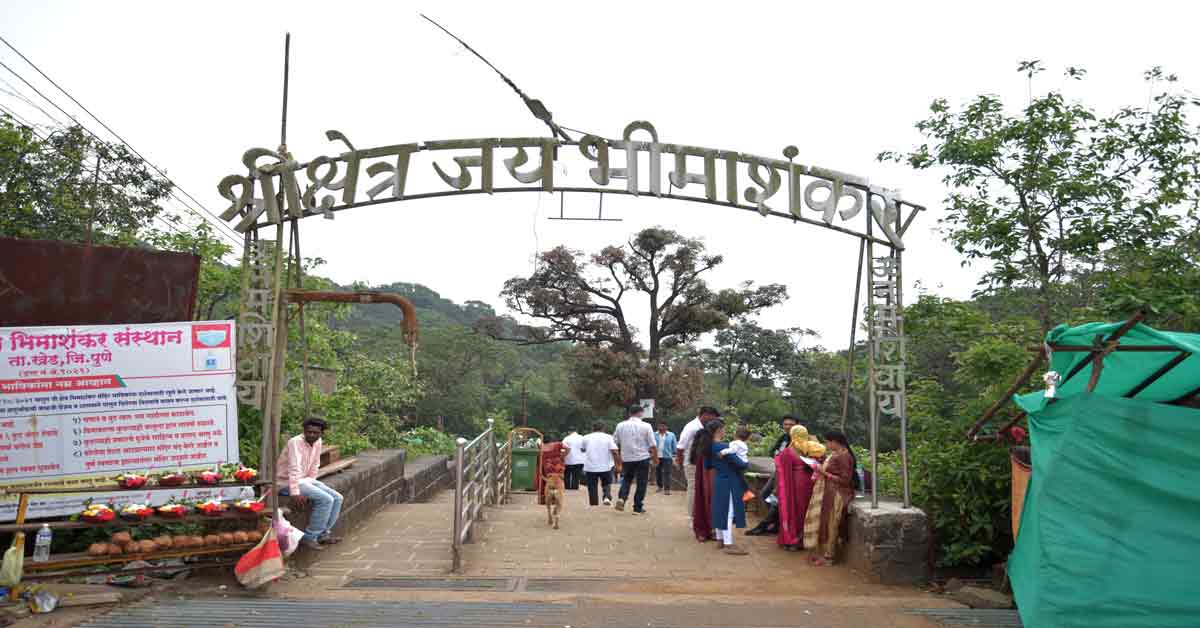 The places where Shiva appeared as the Jyotirlinga became the Jyotirlinga shrines, Shiva Purana mentions that originally there were 64 Jyotirlinga
shrines in India and Nepal area but 12 amongst them are considered the holiest, they are Somnath and Nageshwar in Gujarat, Mallikarjuna in
Andhra Pradesh, Rameshwaram in Tamil Nadu, Kedarnath in Uttarakhand, Baidyanath in Jharkhand, Kashi Vishwanath in Uttar Pradesh,
Mahakaleshwar and Omkareshwar in Madhya Pradesh, Bhimashankar, Trimbakeshwar and Grishneshwar in Maharashtra.  Jyotirlinga is
the partless reality or the supreme form of Lord Shiva. It signifies the endless presence and significance of the Lord of Lords.

Bhimashankar is one of these 12 holy shrines and the legend associated with this temple says that once there was a fearsome demon named
Tripurasur who had wreaked havoc on earth and in heaven. Tripurasur was so powerful that none of the gods could vanquish him, he had 3 flying
citadels or “tripura” which were equally invincible. Eventually Lord Shiva was requested to slay the demon. A pitched battle ensued between Shiva
and Tripurasur ending in the defeat of the demon. The battle was so very fierce that the sweat which poured from Lord Shiva’s body formed the
Bhima river. Eventually Lord Shiva stayed back at this place in the form of Bhimashankar and has been worshipped ever since. 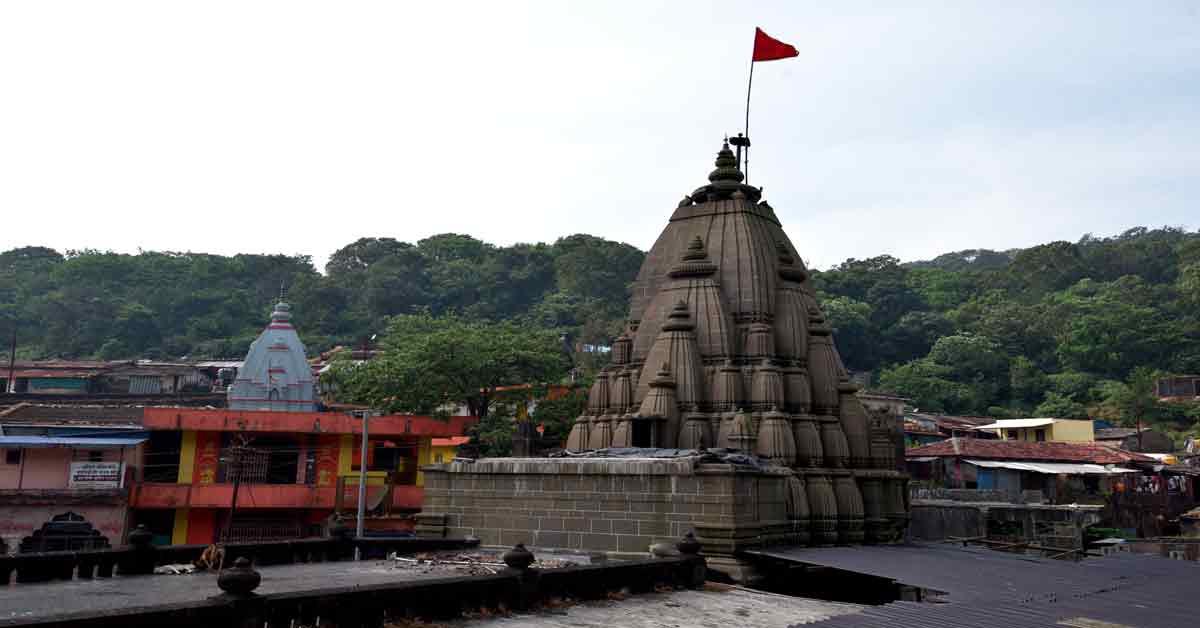 The Bhimashankar mandir – The temple is situated in the valley and one has to climb down at least two hundred steps to reach the temple. The
area is calm, interspersed with the chirping of birds.The original shrine called “Bhimashankaram” is ancient and mentions have been found in
literature dating back to 13th century CE. The main structure of the temple is relatively new and built in the Nagara style of architecture around 18th
century CE. The temple structure is relatively modest, built of dark stone, the shikhara was built by Nana Phadnavis and even Chhatrapati Shivaji
Maharaj is said to have made donations to the temple. The shikhara and interiors have carvings of gods, demigods and human figurines as well.
The sanctum sanctorum hosts the “swayambhu” Shivlingam right at the centre, decorated gracefully in silver and decked in flowers.

As is the custom, the statue of Nandi the bull sits outside the shrine. Additionally there is a shrine dedicated to Lord Shani or Shaneshwara inside
the complex. There are big “deepmalas” or lamp stands outside the temple which when lit during festivals, brings a holy glow to the precincts. The
huge bell outside the temple has an interesting story attached to it. The bell is Portuguese in origin, which Chimaji Appa had won as war booty after
the Battle of Bassein.

Besides the main temple, there is a shrine dedicated to Kamalaja devi who is a form of Parvati devi, she had aided Lord Shiva during the battle.
Shankini and Daakini who are demi goddesses also have shrines in the temple complex. Other significant places around the main temple are the
Mokshakund tirtha, Sarvatirtha, Kusharanya tirtha and Jnyanakund.

Bhimashankar draws devotees from near and far all around the year but during the festival of Shivaratri the numbers run into lakhs and it might take
a really long time to get darshan.

Places around the Bhimashankar temple – Gupt Bhimashankar is a place of interest in the vicinity of the main temple. It is at this place that river Bhima
originates and the water  of the river  swirls over a shivlinga, submerged in the water. It is believed that the swayambhu shivlinga that is worshipped in
the temple had appeared here. The route to Gupt Bhimashankar is mostly a trek route passing through forest.

Another place of interest to history buffs and adventure enthusiasts is the Bhorgiri fort. Most of the fort lies in ruins but still its interesting to see the
shivlingams and statue of Virbhadra inside the fort.

Bhimashankar wildlife sanctuary – Bhimashankar is not just famous for its religious and spiritual significance, the surroundings of the temple is a
nature lover’s paradise. The area was designated as a wildlife sanctuary in 1984 and is also a bio-diversity hotspot of the Sahyadri region. The
sanctuary is teeming with variety of flora and fauna, many of which are endemic.  The most iconic animal found here is the Giant Indian squirrel or
Malabar giant squirrel, locally called “shekaru”. It is the state animal of Maharashtra and an endangered species, this sanctuary being its natural habitat.
Other animals found here are leopard, sambar, barking deer, wildboar and monkeys.

The sanctuary is an ideal place to spend some quiet time appreciating nature in all its virgin glory, while the Bhimashankar temple, sitting amidst these
beautiful forest enrobed mountains is an epitome of spiritual calm and enlightenment.