If Charminar is the most iconic building in Hyderabad then the second most iconic structure is the Golconda fort. Situated about 9km away from
Hussain Sagar Lake in the western part of Hyderabad, Golconda stands as a mute spectator of centuries of history unfolding within its walls and
has seen the rise and fall of some of the greatest kingdoms in the region. 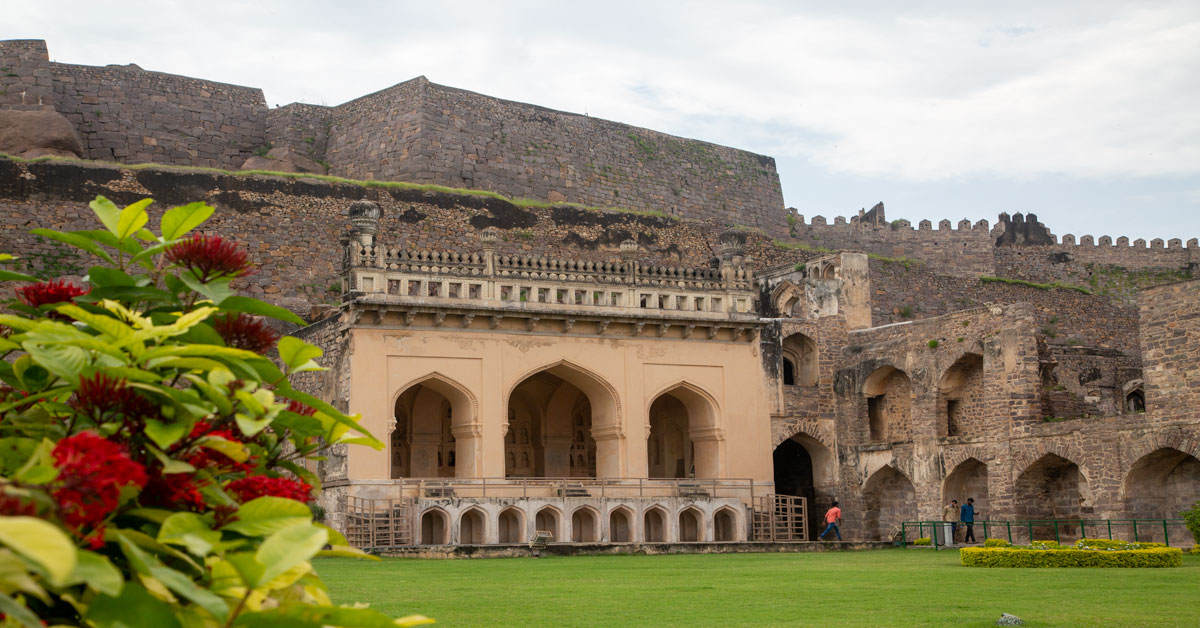 The name Golconda originates from the Telegu term “Golla Konda” which means shepherd’s hill. Folklore says that during the rule of Kakatiyas,
once a shepherd boy found an idol of a god atop this hill and went to inform the king who in turn built a mud fort around the holy spot. Golconda
fort which was also known as “Mankal” in old times was constructed in 1143 CE by the Kakatiya kings. Some accounts attribute that Rani
Rudrama Devi or her successor Prataprudra who were prominent rulers of Kakatiya dynasty had also rebuilt the fort during their rule. However,
Golconda’s importance and fame started to flourish when it came under the rule of the Bahamani sultans after passing through the hands of
Kamma king Masunuri Kapaya Nayak. 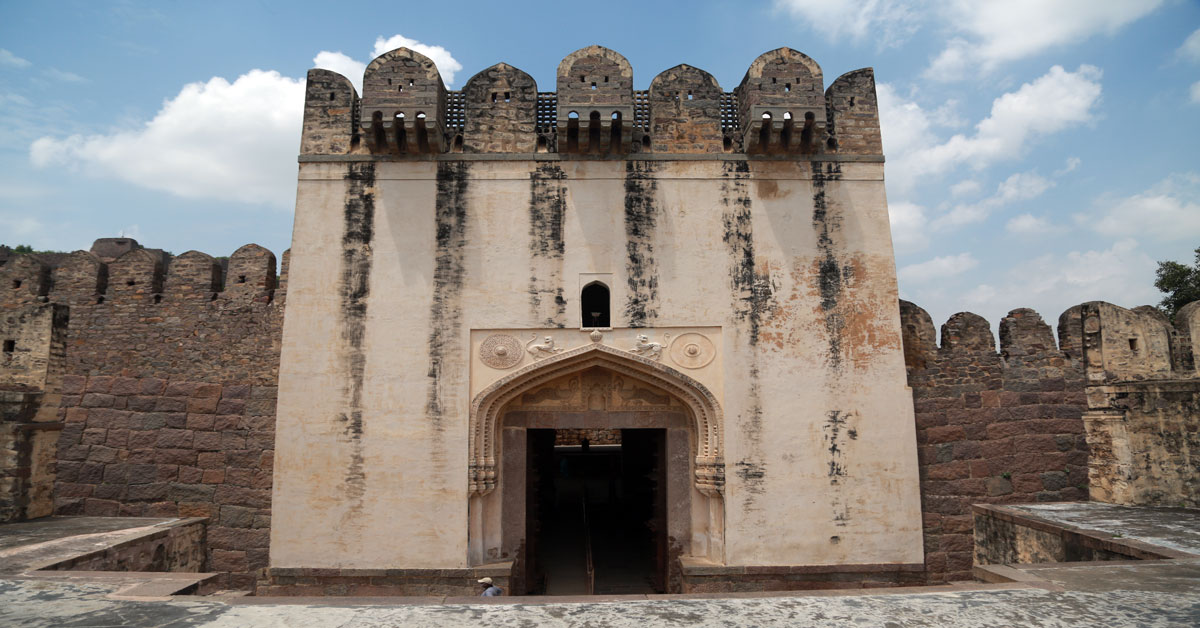 In 1364 CE Golconda was ceded to the Bahamani sultanate who fortified the original mud fort and made a number of additions. Thus, 200 years
after it was built, Golconda came under Muslim rule and slowly the Hindu origins started to dwindle into the pages of history, only small remnants
are seen today in the sculptures inside the fort. For the next 150 years, the Bahamani sultans ruled the Golconda area and slowly the area started
to gain importance. In 1501 CE, Sultan Quli Qutub ul Mulk was sent by the Bahamani sultan as Governor of Golconda. Over the next few decades,
the Bahamani sultanate declined and in 1538 CE Quli Qutub ul Mulk declared his independence and established the Qutub Shahi dynasty.
Golconda became the capital of this new dynasty and emerged as one of the most invincible and important fortresses in India.

The first three Qutub Shahi sultans expanded the mud fort and transformed it into a massive granite structure which has stood the test of time.
Under the Qutub Shahi rule, Golconda was not only the capital and seat of power but also an important commercial hub. In early 17th century
there used to be a flourishing cotton weaving industry here which produced high quality plain and patterned cloth made of muslin and calico.
These cloth materials were consumed locally and also exported to far off countries such as Persia, eastern Europe in the west and Java and
Sumatra in the east. Golconda and its surrounding areas are world famous producers of diamonds and have yielded some of the best jewels
in the world. The Golconda diamond mine is one of the first mines to be discovered and during Kakatiya period it was the only known diamond
mine in the whole world. Golconda along with Kollur and Atkur mines have produced some exceptionally beautiful diamonds such as the
Koh-i-noor, Daria-a-noor, Noor-ul-ain, Hope diamond, Orlov diamond, Regent diamond, Princie diamond, Wittlesbach-Graff diamond, Nizam
diamond, and Jacob diamond. Some lost diamonds such as Florentine Yellow, Akbar Shah and the Great Mogul had also come from these mines. 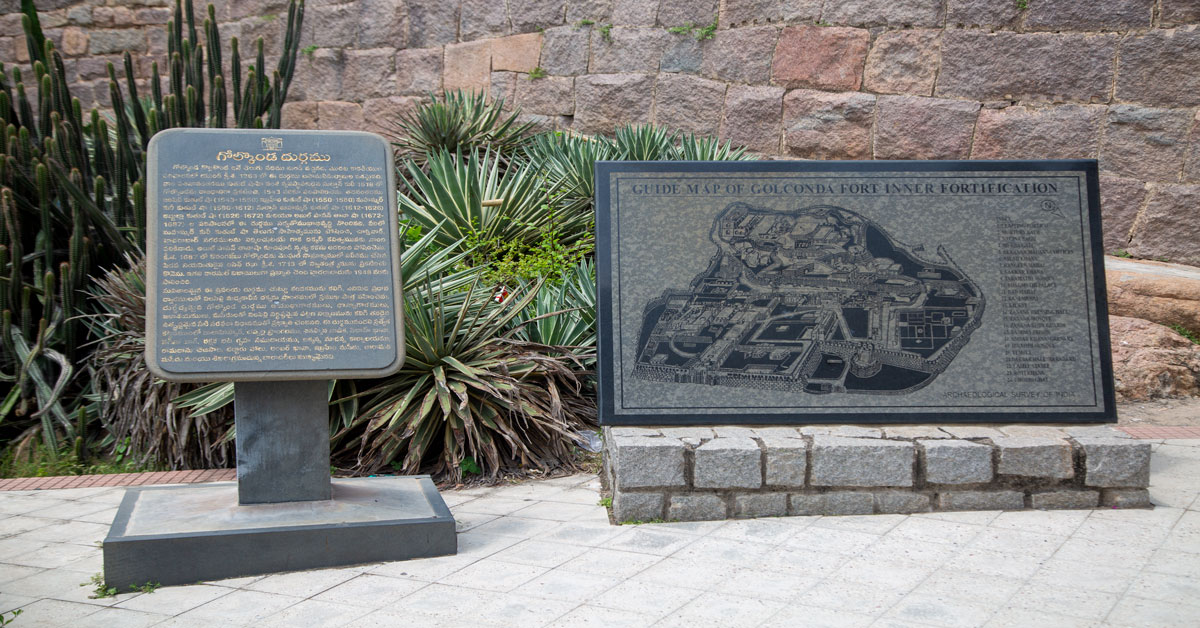 Golconda expanded in size to a circumference of 5km during the first six decades of Qutub Shahi dynasty, the exteriors were fortified and 8
doorways were strongly secured with huge teakwood doors studded with iron spikes. Golconda was practically impregnable, so much so that in
1687 CE when Mughal emperor Aurangzeb laid siege to the fort, he was unsuccessful and had to continue the siege for eight months. Eventually
he bribed an official named Abdullah Khan Panni who helped him enter the fort through Fateh darwaza and capture the great fort. Owing to this
deceitful tactic that Emperor Aurangzeb had resorted to, he is often referred to as a coward. Not only did he seize the fort but deliberately left it in
ruins. Today we don’t get to see Golconda fort in its erstwhile glory, we see only the broken and ruined portions of what was once one of the most
formidable citadels in India. Some doors, pavilions, mosques are still standing and tell the visitor fascinating tales of a long-gone era. 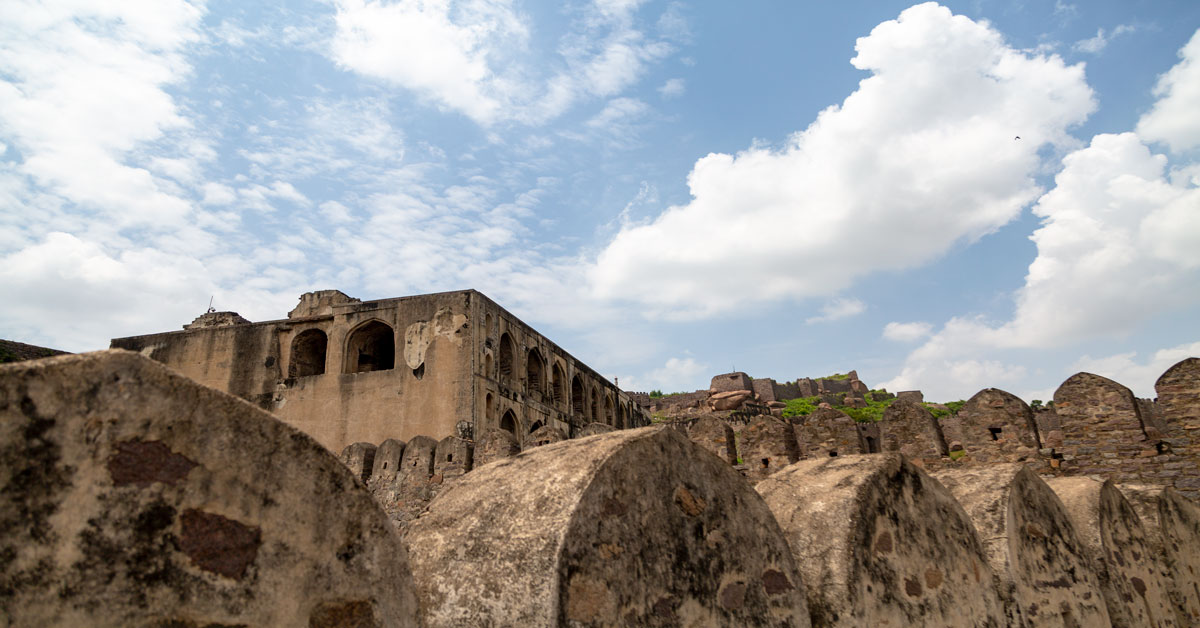 The Golconda fort complex is made of four distinct forts with a 10km long wall, 87 semi-circular bastions mounted with cannons, eight gateways and
four draw-bridges. Some of the important doorways are Bala Hissar Darwaza, Fateh Darwaza, Banjara Darwaza, Moti Darwaza, Patancheru
Darwaza, Mecca Darwaza and Yali Darwaza. Bala Hissar Darwaza on the eastern side is the main gate of the fort and the pointed arch above the
door has beautiful sculptures of peacocks and other animals such as lions and the mythical yalis. The peacocks have beautiful ornate tails which
is typical of Hindu architecture and these sculptures reveal the Hindu origin of Golconda. The next most important doorway is the Fateh Darwaza,
so named because Emperor Aurangzeb marched in through this gate to vanquish the fort. Fateh Darwaza is the lowest point of the fort and has a
special phenomenon happening here – an acoustic effect. A handclap made beneath the dome behind Fateh Darwaza can be heard clearly at Bala
Hissar Pavillion which is about 1.5 km away and one of the highest points inside the Golconda fort. This engineering marvel was made as a way of signaling
an enemy attack and alerting the people inside the fort. 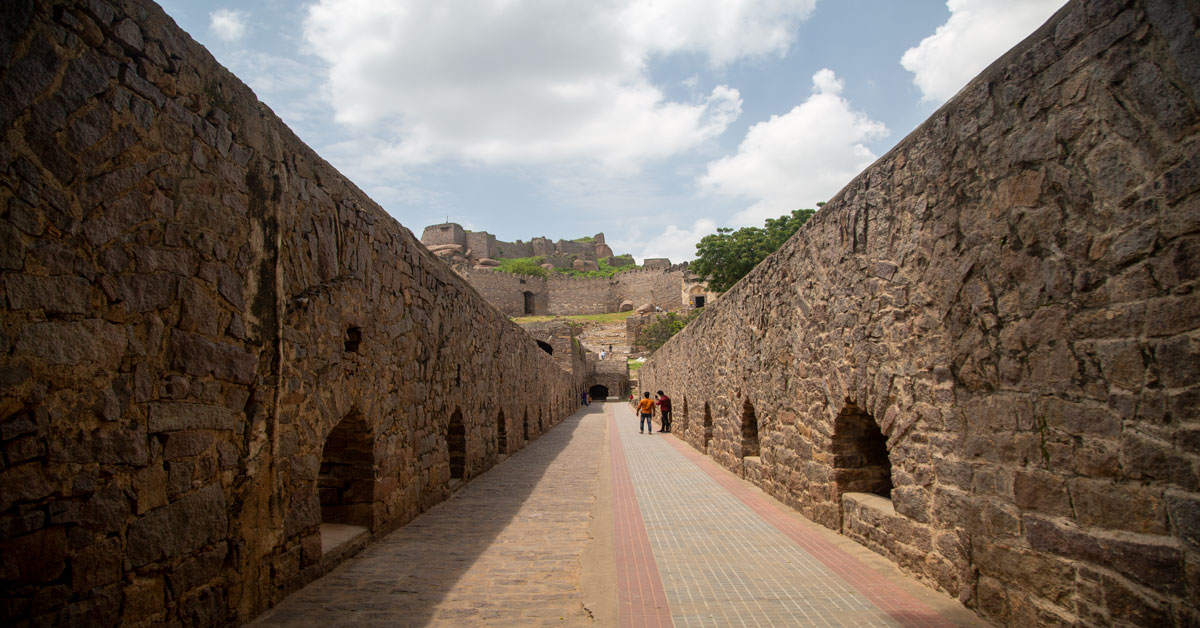 Golconda fort is tentatively enlisted to become a UNESCO World Heritage Site and is also counted as an archeological treasure on the “list of
monuments”. Although many portions of the fort are in ruins and almost crumbling down to rubble, there are still quite a few structures which will
be interesting to visit. The tombs of Qutub Shahi kings have beautiful Islamic architecture, Taramati mosque, Kala Mandir, Ramadas Bandikhana,
private royal chambers, Durbar hall, Nagina bagh, mosque of Ibrahim, Bala Hissar Pavillion, stables are all worth visiting. The Taramati Baradari
on top of the fort is a scenic structure from where one can gaze at Hyderabad city sprawled out in front. Another extension of the fort is the Naya
Qila complex which is mostly out of access for tourists as it has been turned into a golf course. Recently, a resort has been set up at Taramati
Baradari and features an open-air pavilion, swimming pool, multi-cuisine restaurant and a banquet hall. It’s a good place to unwind for the traveller
after having taken a tour of the Golconda fort.