Nestled among the lofty hills of the Sahyadri range, with lush green forests, effervescent waterfalls and serene blue lakes, lies Mulshi taluka, in the
western part of Pune district. It is one of the most picturesque parts of the district but its popularity or fame is much less compared to other hill
stations like Lonavla or Mahabaleshwar. Mulshi and Tamhini have a huge potential for tourism to flourish given its natural beauty which is truly
unparalleled. Here we’ll take a look at some of the best spots. 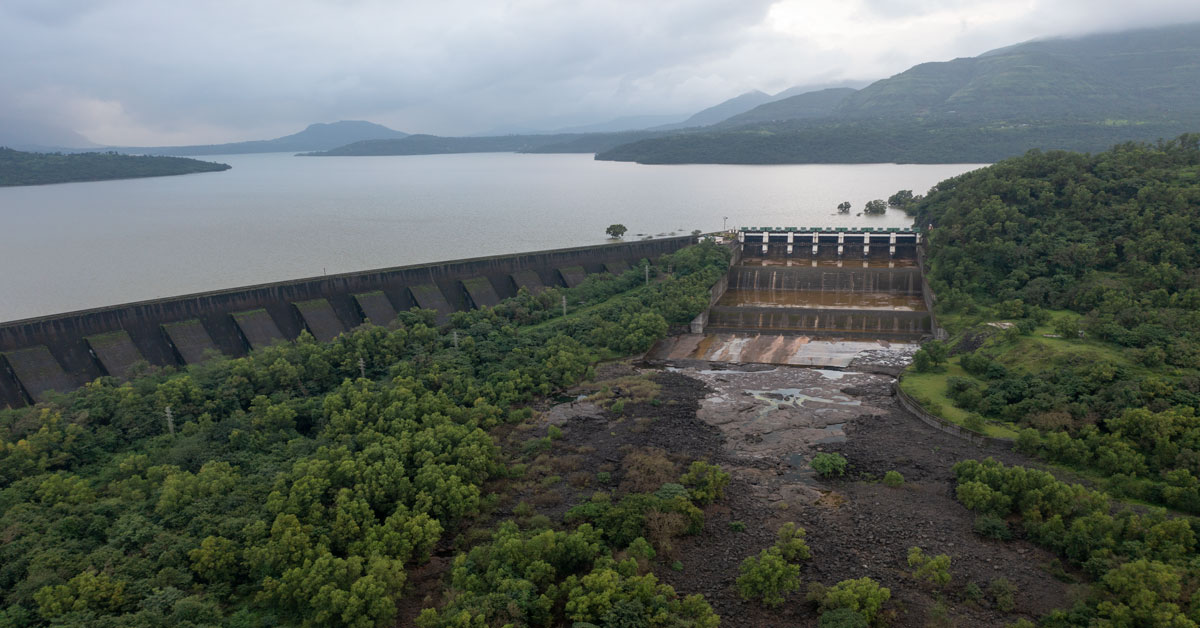 Mulshi Lake and dam (Tata Talav) – The Mulshi dam was constructed in 1927 by Tata Power impounding the Mula river and creating a huge
reservoir which is called the Mulshi Lake. Bhira Hydro Power station with a capacity of generating 300 MW electricity is in the vicinity. The lake is
a great tourist attraction with its clean water reflecting the azure blue sky and the green hills surrounding it, making it ideal for picnics and leisurely
strolls. In recent years, a number of restaurants and resorts have come up here to cater to the needs of the tourists. Mulshi lake is about 47 km
from Pune and takes about a couple of hours by road. Another picturesque lake close by is the lake behind Temghar dam. It is a 42.5 m high dam
constructed on the Mulshi river and one of the 4 dams supplying water to Pune city, the area surrounding the backwaters of the dam is scenic.
The Hadshi dam is a small lake about 45km from Pune, sitting at an elevation of 630m. Despite its small size, Hadshi attracts tourists for its clean
pollution free environment and boating facilities in the lake. 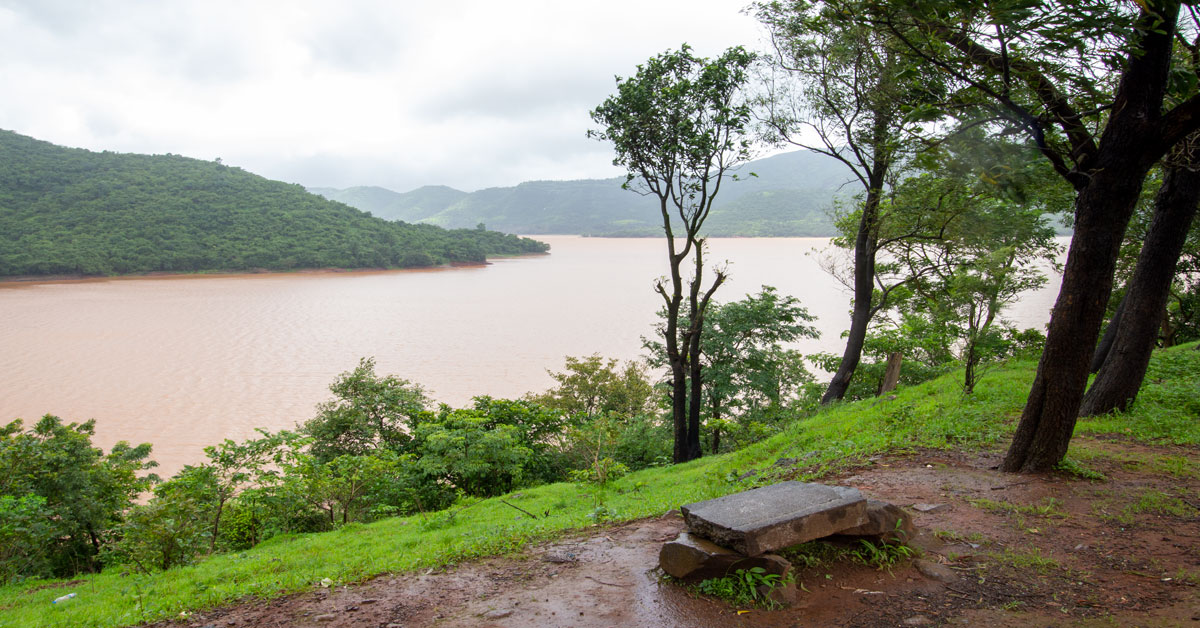 Rihe dam in Mulshi area is another beautiful lake nestled amidst green hills. The dam is small, can be crossed on foot and makes for an easy
trekking route. The greenery around the lake is eye soothing and one can catch glimpses of birds here as well. There’s a small Datta mandir, a
short distance away from the lake. Located on the outskirts of Hinjewadi is a pretty lake by the name of Kasarsai Dam. This place is a welcome
relief from the hustle and bustle of the city and lets one watch a beautiful sunset amidst a peaceful setting. Boating is allowed in this lake at INR
70 per person. Light refreshments are sold in the nearby stalls. During

monsoon, the heavy rain gives birth to innumerable waterfalls in the Mulshi Tamhini ghat area. From a mere trickle of water to cascading white
foamy water, these ephemeral waterfalls are a sight to behold. Out of the many, Palse waterfall is quite popular with tourists and adventure
enthusiasts alike. It is located about 50km away from Pune in Tamhini area. At the base of the waterfall one can enjoy sitting and getting
drenched while a short trek along the course of the waterfall leads high up towards its origin where the water falls from a great height in a
curtain of sprays and mists.

This area is not just known for its natural beauty but also for a couple of planned cities namely Amby Valley and Lavasa city. Amby Valley was
developed by Sahara India Group in 2006 with the objective of creating a super luxurious township for the uber rich Indians. The gated township
has all modern facilities like luxurious bungalows, restaurants, shopping complexes, school, hospital, artificial lakes, artificial lagoons, 18 hole
golf course and even a helipad. Tourists are not allowed to enter but can see the beautiful township from outside. 60km away from Pune is
Lavasa city which was designed to be a hill town modelled on the town of Portofino in Italy. This little city nestled at 2070 feet beside the
Dasave lake has a fantastic location and is a major tourist attraction. It has some good restaurants and bungalows available for rent, play area
for children and boating facilities in the lake.  The Lavasa waterfront is the star attraction which draws huge crowds, especially on weekends.
Unfortunately, Lavasa has been plagued by a number of environmental issues and litigations which has prevented the completion of work here.
Nevertheless it remains a popular tourist hangout. 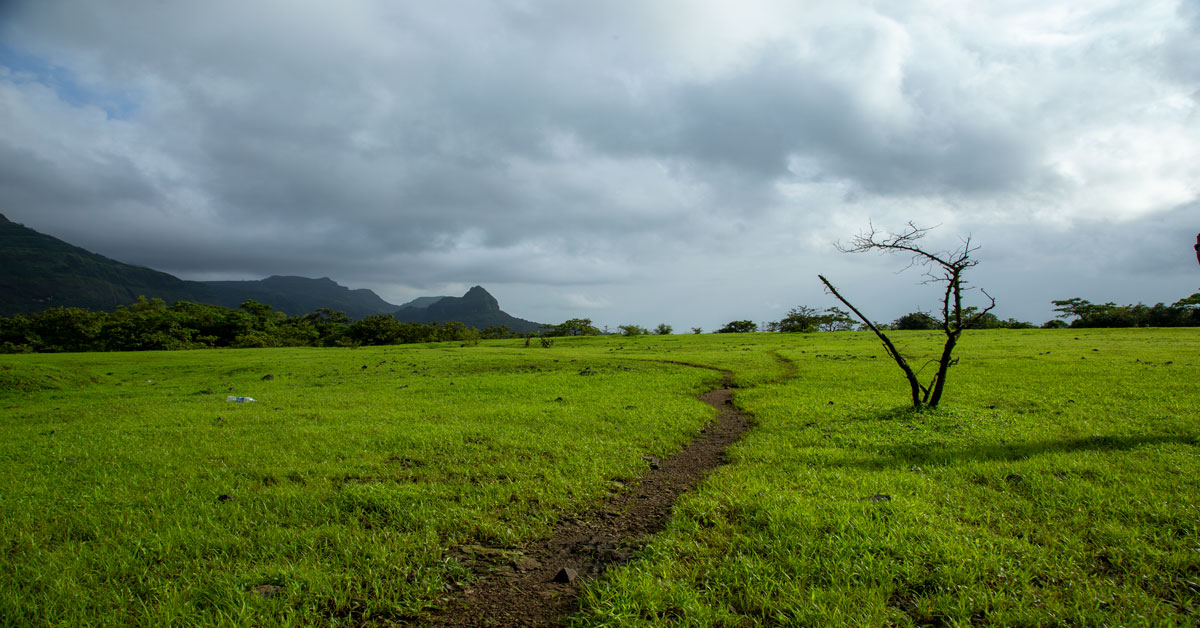 Tamhini wildlife sanctuary – Tamhini Ghat area is mostly covered in forests and recently it has been declared as a wildlife sanctuary to protect
the indigenous flora and fauna from the ravages of unregulated tourism. A famous trekking route which is called the “Andharban forest trek” is
conducted here, especially during or post monsoon. The trek route passes through the evergreen Sahyadri forests and is considered easy as it is
mostly a downhill climb from Independent Point near Pimpri dam to its end point at Patnus village. True to its name, the forest is actually dark
owing to the thick cover of trees which obscures the sunlight. Numerous streams and waterfalls need to be crossed inside the forest during the
monsoon time and birds like Jacobin cuckoo, Malabar whistling thrush, dwarf kingfisher and minivets will keep company with their melodious
chirping. The view of Kundalika river and its rich green surroundings is truly breath-taking, making it one of the best trek routes in the area.
Another easy trekking route is Mulkhed trek. Mulkhed is an undulating upland overlooking the Mula river, just about 8km away from Pirangut.
Its more like a route for a leisurely walk up the green hillside than an actual trek.

The area of Mulshi is dotted with a number of forts which had great strategic importance during the Maratha rule and now have turned into
popular trekking spots. The 500 year old Koraigad fort is close to Lonavla and is a great spot for trekking all year round. The fort is mostly in
ruins excepting for the Korai Devi mandir and Laxmi tope which stand today. Tikona fort or Vitandgad as it is locally called is situated near
Kamshet. It has a distinctive look owing to its pyramidal structure with a stature of 3633 feet. Tikona has huge doorways, stone cut water
cisterns and some ancient Buddhist and Satavahana caves. The Trimbakeshwar Mahadev mandir on the fort is another attraction. The trek
route is easy to moderate and offers panoramic views of the Maval region. Ghangad fort near Tamhini ghat is almost 300 years old and it is
said that it served as a prison during Maratha rule and also as a watchtower for the trade route to Pune. The trek is easy to moderate and the
water cisterns and gates are still visible. Tailbaila fort is 3322 feet tall in the form of a huge wall like structure. The trek begins from the village
of Bhamburde and once you reach the top you can see Ghangad fort, Savashnicha ghat and Navra Navri pinnacle.

The area has a lot to offer to religious minded people in the form of numerous temples. The Satya Sai mandir near Hadshi is run by the Satya
Sai Trust and is a serene place to visit with family and friends. Idols of Pandurang, Shirdi Sai baba and Satya Sai baba are venerated here.
Chinmay Vibhooti is another beautiful temple complex about 20km away from Mulshi dam. It was built in 2012 by Chinmaya Trust & Swami
Tejomayananda in honour of Swami Chinmayananda who preached at this place. The Pranav Ganesha temple and Hanuman mandir are worth
visiting. Access to this temple complex is easy and has sign boards leading to the venue. 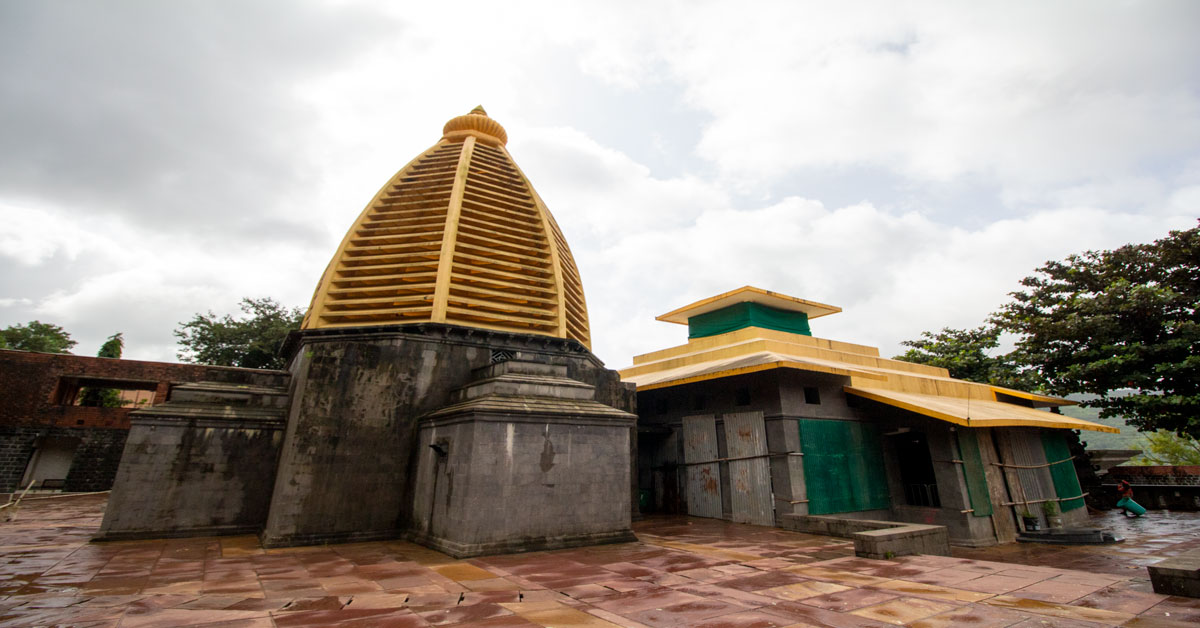 The Mhasoba Devsthan at Kharawade is another famous temple dedicated to Lord Mhasoba who is a form of Lord Shiva and very popular in the
area. The idol is believed to be  “swayambhu” and the temple complex is large and spacious with ample parking space. Bapuji Bua is a locally
revered deity in Maharashtra and many believe that he’s a form of Lord Shiva. The irregular stone idol smeared with orange vermillion is
considered to be the guardian deity of many villages and sometimes associated with ancestor worship. The Bapuji Bua mandir at Godambewadi
near Hinjewadi is very popular amongst locals. 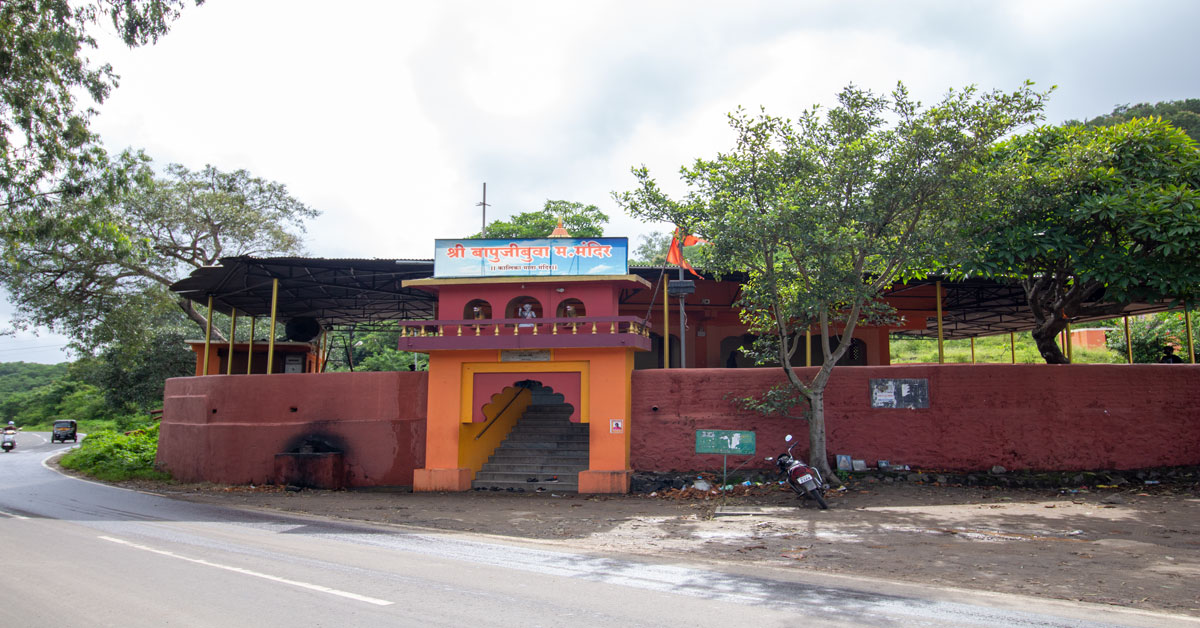 About 40km from Pune, situated atop a hill is the Neelkanteshwar Mandir, in Dajave, one of the best attractions in the area. A half an hour trek
leads to the top of the hill adorned with idols of Hindu gods and goddesses. The hill is a vantage point for gazing at the Panshet, Varasgaon &
Khadakwasla dams and also the Mula and Mutha rivers. 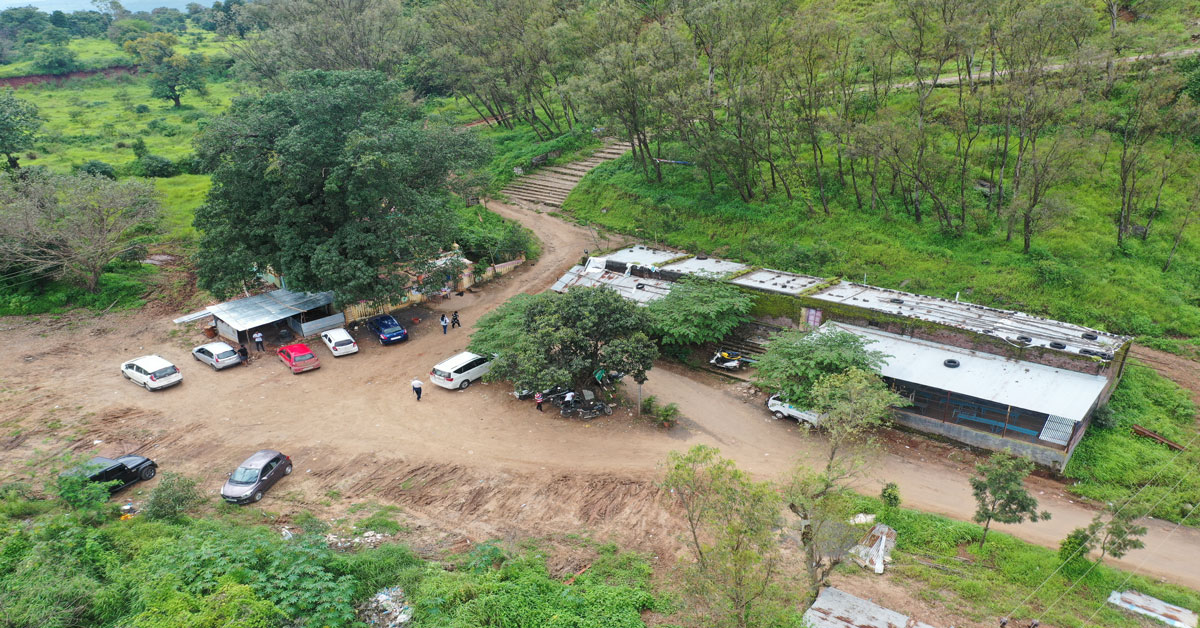 In the village of Bhalgudi, the Sree Kshetra Swayambhu Narayan mandir is situated. It is a beautiful temple complex with an idol of Lord Vishnu
intricately carved in black stone. The surroundings are very peaceful and ideal for a day trip.

As tourism is steadily flourishing in the Mulshi Tamhini area, a number of resorts and agro-tourism spots are developing to provide the tourists with
good facilities and also let them get e taste of rural life. Girivan which is a privately owned hill station stands at a majestic height of 2400 feet,
higher than Lonavla and is called “mini Mahabaleshwar” for its amazing beauty. Girivan has good accommodation and refreshment facilities to suit
all budgets, added to that they have provisions for rain dance, rifle shooting and an activity park called Mount View sports park which offers zipline,
Burma bridge and commando rope. Avanti Kalagram is a resort near Mulshi overlooking the Khamboli dam. It offers an unique experience by
providing modern amenities along with authentic Maharashtrian food, crafts village and a stay in a rustic setting. Niwara agro tourism near Kolavade
is another popular tourist spot. The 1 acre farm produces organic rice, fruits, vegetables and some cash crops and gives visitors a real experience of
farm life. The per person charges range from INR1200 to 1500 and include food and accommodation. The Temghar dam and Lavasa city are closeby.

Mulshi and Tamhini ghat areas are steadily gaining popularity amongst both locals and tourists from other states owing to its easy accessibility, great
locations, pristine nature and availability of modern amenities. The combination of lakes, waterfalls, forests, historical forts and temples makes for an
interesting amalgamation which is sure to appeal to visitors.