SIGNIFICANCE AND SYMBOLISM OF TEMPLE GOPURAMS

SIGNIFICANCE AND SYMBOLISM OF TEMPLE GOPURAMS

Indian mythology is a fascinating galaxy of stories and legends of gods and goddesses and the temples dedicated to the pantheon of gods are no less fascinating. Indian temple architecture is one of the most brilliant not just in terms of its exquisite craftsmanship but also in its ideology and conception. From north to south, east to west, wherever we go, we get to see variations in temple architecture and building styles. However, the underlying concept of a temple’s layout remains constant, whether it belongs to the Nagara style, Kalinga style or the Dravidian style. Hindu temples are conceptualized as a human body in a lying posture. The entrance gateway or “gopurams” represents the feet, the “dhwaja-stambha” or flagstaff represents the centre of the body, the entrance hall or “sabha mandap” and the gallery represent the abdomen and chest while the sanctum sanctorum or the “garbha griha” represents the human head.

When we visit a temple, the first part to come in sight is the entrance gateway or the gopuram. Even before setting foot inside the temple, devotees bow their heads at the gopuram in respect to the deity inside and this is why the gopurams are so very significant and an important part of temple architecture. A well known Tamil saying goes “gopura darshanam, koti paapa nashanam” which means that by seeing the gopuram, a person’s sins are absolved. In south Indian temples, the gopurams are exquisitely carved and designed and their height is always more than the main shikhara or vimana of the sanctum. Whereas in north Indian and west Indian temples, the gateways are present but usually less ornate and their height is always less than the main shikhara of the temple. The building plan of a gopuram is usually a rectangular stone base with a superstructure of brick and pilaster with a barrel vault ceiling. On the top are placed “kalashs” or vessels of varying numbers.

In old times, the towering gopurams used to serve as landmarks for the travellers and they had a scientific purpose as well. Due to their great height, they used to act as lightning conductors and also receiver of cosmic energy which was eventually transmitted to the deity inside the sanctum sanctorum. Nowadays, they are a reminder of the splendour of India’s rich cultural heritage.

Swami Narayan temple, Ahmedabad – The northern gateway is the principal entrance. The uniqueness of this gateway lies in the fact that it is a blend of local, regional and British architectural styles. On the panels are seen motifs of women in Rajasthani and Marathi folk costumes carrying babies.

Virupaksha temple, Hampi – This 14th century temple has a 9 tiered eastern gateway which is 50 m in height and covered in beautiful sculptures. The gopuram on the northern side is called “kanakgiri gopura” and leads to subsidiary shrines and eventually to the Tungabhadra river.

Parthasarathy temple, Chennai – This 8th century temple is one the oldest in Chennai and highly revered. Its also one of the few temples dedicated to Sri Krishna as Parthasarathy or Arjuna’s charioteer. The Rajagopuram built by Pallava king Tondaiman Chakravarthy is a 7 tiered structure, with its beautiful sculptures in vivid colours. Its one of the most eye catching features of this gopurams temple and a true gem of Dravidian architecture.

Ambabai temple, Kolhapur– Better known as the Mahalaxmi temple, it has been built in the Hemadpanthi style of architecture. The entrance gateway is modest with red tiled sloping roofs. The main temple is covered in exquisite carvings.

Dakshineshwar Kali mandir, Kolkata – This temple built by Rani Rashmoni in 1855 is one of the most famous Kali temples in West Bengal. The architecture is known as the “navratna” style whereby the main temple has 9 spires. The temple sits amidst a huge courtyard which is entered through a modest gateway with very little ornamentation. The simplicity of the architecture is sure to soothe the eyes.

Vaikom temple, Kumarakom – One of the oldest Shiva temples in Kerala supposedly belonging to the Treta Yug. There are 4 gopurams in four cardinal directions, they are simple structures with sloping red roofs and glistening golden kalashes on top.

Grishneshwar Jyotirlinga temple, Aurangabad – This is one of the three jyotirlinga shrines in Maharashtra. The temple had been destroyed by Muslim invaders and eventually rebuilt by Ahilyabai Holkar of Indore. Although the temple follows south Indian style in the build of its 5 tiered shikhara, the gateway is comparatively simple.

Siddhivinyak temple, Mumbai – This iconic temple dedicated to the Siddhivinayak form of Ganapati is more than 200 years old. The original shrine was smaller but in late 1990s it was restructured to incorporate a number of shikharas topped by crowns. During rush hours, devotees who cannot enter the temple premises, bow to the shikharas in respect to the deity.

Somnath temple, Veraval – The Somnath temple has been destroyed a number of times by invaders and finally the present temple was built by famous architect Prabhashankar Sompura in 1951. Its built in Chalukya architectural style and has excellent carvings on the exterior and interior walls. The entrance is an imposing structure having two floors and topped with three shikharas. The decorative elements have a typical Rajasthani and Gujarati style. 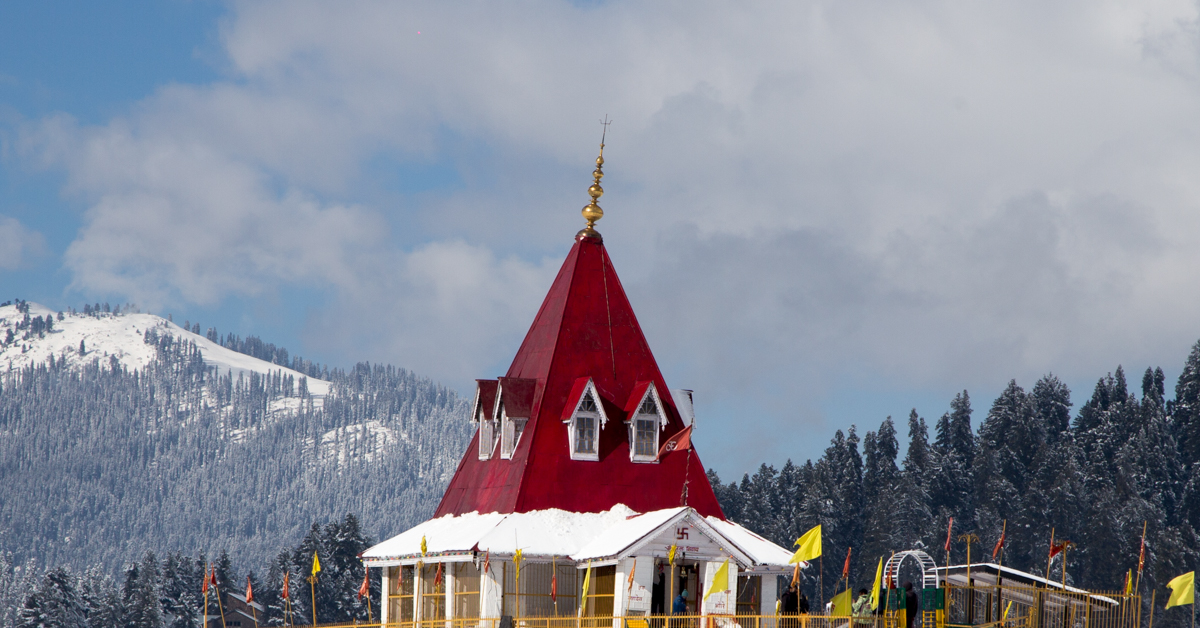 Shiva temple, Gulmarg – Built in 1915 by Maharani Mohinibai Sisodia, this temple is also called Rani temple. The temple is a simple, unassuming structure with white walls and sloping red roof. 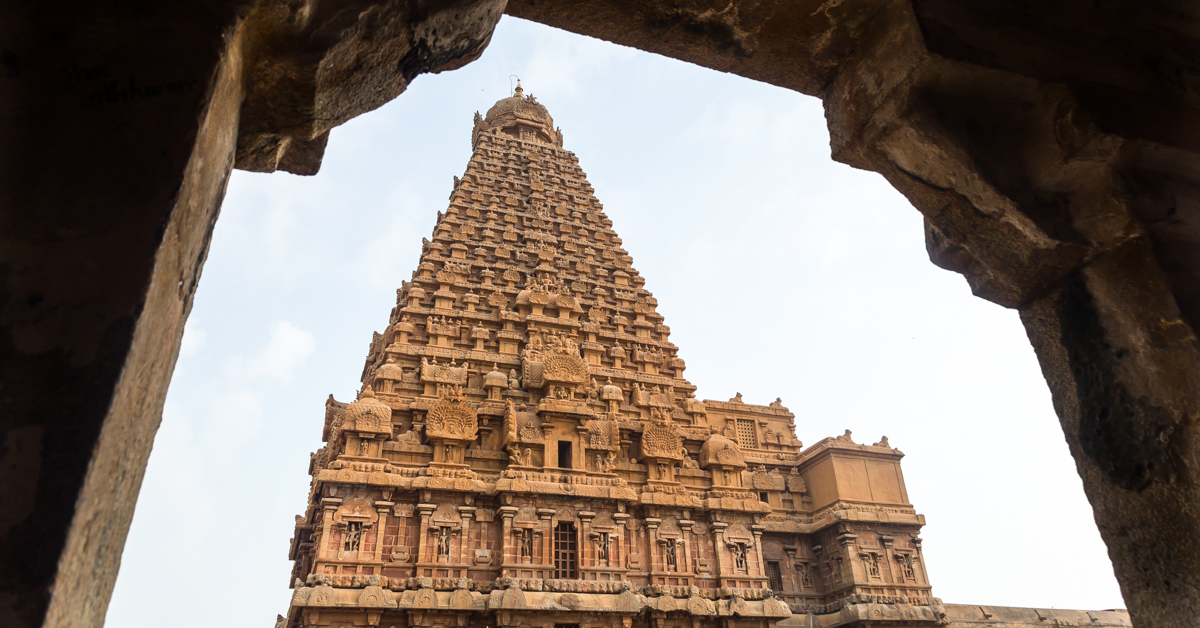 Brihadeshwar temple, Thanjavur – This temple is one of the best examples of Tamil temple architecture. Chola king Raja Raja Chola I had built this masterpiece. The unique feature is that there are two consecutive gopurams on the east. The first one is called “Keralantakan tiruvasal” or sacred gate of Keralantakan. The inner courtyard gopuram is called Rajarajan tiruvasal and it is more ornate of the two. The visitors are sure to be amazed by the exquisite sculptures of these 2 gopurams.

Narmada Udgam Sthan, Amarkantak – It is the site from where river Narmada originates in the hills of Amarkantak region. The complex has a number of small shrines dedicated to different gods and goddesses and all of pristine white colour. The entrance gate is ornate with relief work and domes on top which are somewhat similar to Mughal architectural style. The pristine white of the temple make it a soothing sight.